One year ago today, Rick brought the battery box he had made to my house. We placed it in the basement, connected the ventilation ducts, put the batteries in the box, and wired them up. I consider this the official starting date of my solar system, although I had been running it in a crippled fashion (bad batteries) for over a month. The new batteries enabled me to take full advantage of the shingles on the roof.

So what does it look like a year later? Since August 12, 2005, the charge controller has recorded 1726 kilowatt-hours of solar energy harvested, an average of 4.7 kwh per day. The maximum yield was on June 24, 2006: 10.5 kwh for the day. The minimum was zero, which happened four days last winter when snow covered the roof all day. Here is a chart showing the daily solar yield. 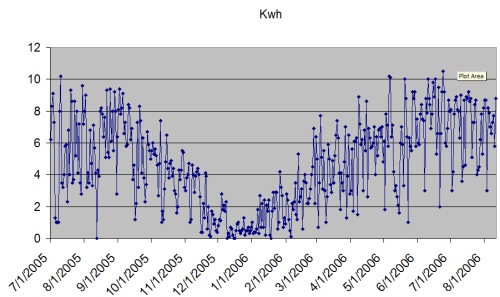 It should be recalled that on some days the charge controller went into float mode, meaning that the batteries were fully charged. More solar energy was available but I had no place to put it. We still haven't connected a dump load to make use of this extra energy, and the possibility of selling back to the grid looks like it will be too much trouble and expense for too little benefit (either to me or the planet).

Of course, there were many days, especially in the winter, when the solar energy was insufficient for my household needs. This chart show the average daily kwh's from solar (from the charge controller's log) and the grid (by reading my electric meter weekly): 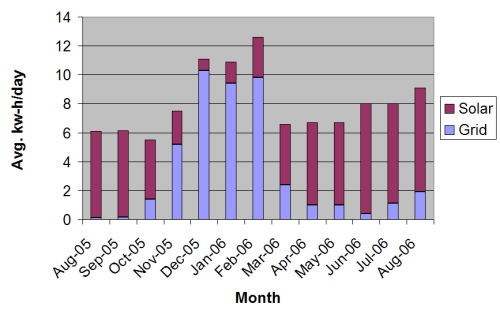 The grid totals for July and August of this year are slightly higher because of the heat wave in late July/early August. While I don't use air conditioning, I had to run the dehumidifier almost non-stop during those two weeks to prevent mold, and I was running electric fans as well. The high temperatures also seemed to reduce the efficiency of the solar shingles, as expected. While many of those hot days had abundant sunshine, the roof never produced more than 8.7 kwh on any one day, even though I had plenty of demand for it. For comparison, there were days of similar length and sunshine in May that produced over 10 kwh. I was afraid that maybe one of my shingle strings had become disconnected, but I checked this with my voltmeter and found that all are still working properly.

While the financial savings so far are very minimal compared to the cost of the system, I have enjoyed being relatively blackout-proof--sometimes when I didn't even know it! I know I was able to watch a World Cup game when the grid power was out, and there were two other times when neighbors asked me if my power was out and I said I had no idea. We haven't had any lengthy blackouts like in 2003, yet, but I'm pretty well prepared if we do.

What's next? I'm currently looking into ways to use solar to heat my house. I have had the shrubs on my south wall removed, opening up lots of area for solar collectors. The simplest approach would be to install a solar air heater or two, but I'm considering something more elaborate, perhaps involving thermal storage. I'll post updates here as they happen.