Predictably, December was by far the worst month so far for my solar shingles. Lots of snow, shortest days of the year, low sun angle, and almost constant overcast brought the average kilowatt-hours per day down to 0.8. In August and September, the average was 6 kw-h per day. Combined with the increased demand from the furnace and the lights and TV being on more often, I went from about 99% of my electricity coming from solar in August and September down to only about 8% (the rest comes from the grid).

The first big snow was on Thanksgiving. I finally ran out and bought a roof rake, which I used for the first time that day. I have to use a ladder to be able to reach the top-most shingles. Raking the snow off of the solar shingles takes about 15 minutes, and I did it about five times in December. There were three days in December when the roof remained covered with snow all day--those were the only days without any solar power generated.

Here's the daily kw-h outputs from the time we first turned the system on through the end of the year:

The data come from the MX-60 charge controller. Some of the numbers for the summer month are below the actual solar power available, since on several days the batteries were fully charged while the sun continued to shine, and the system remained in float mode, unable to use most of the power available. This coming summer I intend to have the dehumidifier hooked up as a dump load, which should mean that I'll be using almost all of the available sunshine. In the long run, replacing my inverter with a grid-tie model is still an option, especially if grid prices skyrocket.

Back in August I haphazardly began reading my electrical meter to see how much grid power I'm using (the monthly power bills, which frequently use estimated readings, don't provide nearly enough detail to track my power use). For the last couple of months I have been more organized, checking the meter every Saturday. The chart below shows my weekly power use, both solar and grid. Until the start of November, the grid numbers are approximate. The dates are the Saturdays that I took the meter readings, and the totals are for the week ending that day. (I couldn't figure out how to get Excel to make the bars wider.) I should also note that the solar numbers are from the charge controller, and therefore ignore the inefficiencies of the charge controller, batteries, or inverter. Unfortunately, the FX2548 inverter does not track its performance the way the charge controller does. 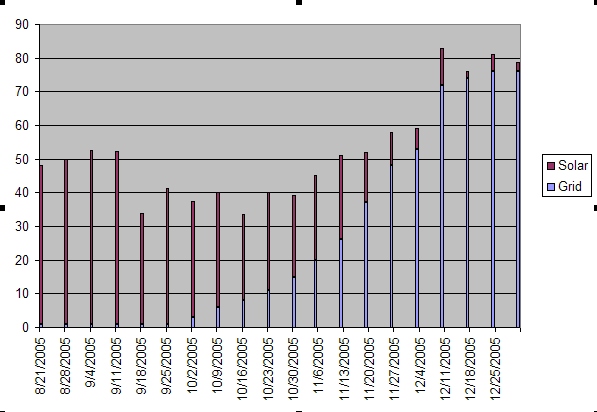 Hopefully December will go down as the worst month of my first solar year--January and February will certainly be the biggest challengers. I'll continue to track the performance and post summaries here.