At about 1 pm today, the output from my solar shingles exceeded 2000 watts! The shingles are rated for a maximum output of 17 watts each, which with 84 shingles should give me 1428 watts. Unisolar says to expect higher output in the first months of use, but this is pretty impressive--about 24 watts per shingle!

(See below* for explanation)

Unfortunately, because of the low capacity of my soon-to-be-replaced cheapo batteries, and because I didn't receive a functioning Outback Mate Controller until last Friday (7/8), I haven't been able to take full advantage of this large amount of power. Here are the daily kilowatt-hour totals for July so far:

Another reason I'm not able to use the full amount of energy available is that I don't have a "dump load" set up yet. I plan to use the dehumidifier as my summer dump load--whenever the batteries are fully charged and the sun is still shining, the dehumidifier will run. On weekends, I have been able to run large loads while the sun is shining--dehumidifier, box fan, dishwasher, washing machine, rice cooker, etc. That's why the weekend totals are higher (it has been pretty uniformly sunny or partly sunny all month long).


The solar shingles on my roof are getting some interested spectators: 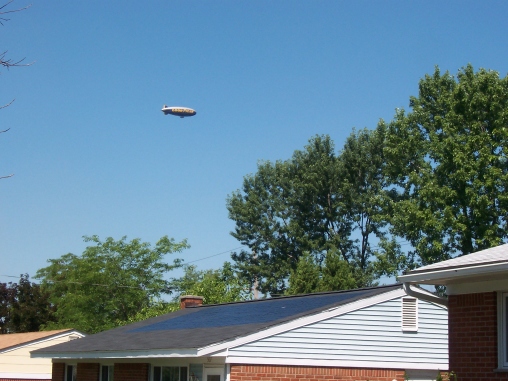 In case you can't tell what that is up in the sky, here's a closeup: 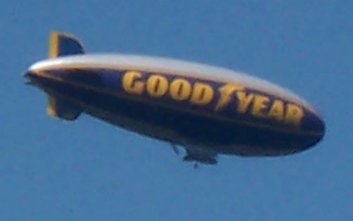 The good news is that all 84 shingles are connected and putting out power--lots of it. At one point on Friday, the charge controller registered over 1700 watts of solar power coming from the roof! That's over 20 watts per shingle. They're rated at 17 watts, although Unisolar says to expect higher power in the first month or two of operation. Still, it's very good to see that they're working. I was even getting several hundred watts during cloudy or daylight conditions when the sun wasn't shining on the roof (this time of year, the sun actually rises well north of east and sets north of west). The total power recorded by the charge controller yesterday was 8.3 kilowatt-hours--more than I use most days. It could have been substantially more, except that the power stops once the batteries are charged and nothing is running. I did everything I could to use that power--laundry, dishwasher, vacuum, and run the dehumidifier--but I still couldn't use all of the sun power available.

Which leads to the bad news. My batteries appear to be pretty bad. They were probably bad when I bought them, although overcharging them the first day the system was hooked up probably didn't help (although they shouldn't have overcharged so quickly if they were good). Basically, they have extremely limited capacity. They were fully charged last evening, but were unable to power the house through the night running only minimal loads--the refrigerator, the TiVo, a few battery chargers and a couple of clocks--probably around 100 watts on average through the night. This obviously won't work as the days get shorter and the nights longer, and I'm running more lights, the furnace, the TV, and other things off of them. Right now the system basically works when the sun is shining--the batteries are balancing out the load, but unable to store much power at all.

So new batteries are now on the agenda. I had hoped to get by with my $20 a piece sealed batteries, but that was a gamble that didn't pay off. I'll probably go with 8 Rolls-Surrette S-460 batteries, giving me 460 amp-hour capacity, or around two to three days of normal use without sun. Should make it through the night, anyway! This will add another $1600 or so to the cost of the project, but I'm already pretty numb to the costs. I'll be tallying those up soon and sharing them here--it's not going to be pretty, I'm afraid.

The other bad news is only temporary. Outback had promised to send me a new Mate controller via two-day air; instead they sent it via two-day ground--waiting two days to send it by UPS ground that is, so it will be here on July 8 instead of last Thursday.

So, right now I can run all sorts of stuff off of my solar roof, as long as the sun is shining! Good batteries and a functioning Mate controller will give me much greater flexibility. Stay tuned!