1645 Adriaen Van der Donck and Mary Doughty were married on October 22 in the Reformed Dutch Church of New Amsterdam. [1]

Mary Doughty was a daughter of Francis Doughty, of Maspeth, Long Island, which is shown as "Mispath" on a map dated 1685. [2]

1645 Francis Doughty conferred his farm on Flushing Bay to daughter Mary when she married that distinguished "doctor of both laws" Adriaen Van der Donck, who obtained a patent for it May 17, 1648. [3]

c 1651 Thomas Stevenson, an englishman living at Flushing, had moved to the farm on Flushing Bay as a tenant for Van der Donck; but after the departure of Van der Donck to Holland, Stevenson got a patent from Stuyvesant confirming these premises to himself. The tract was known as Stevens' point and as Yonker's Island. [6] 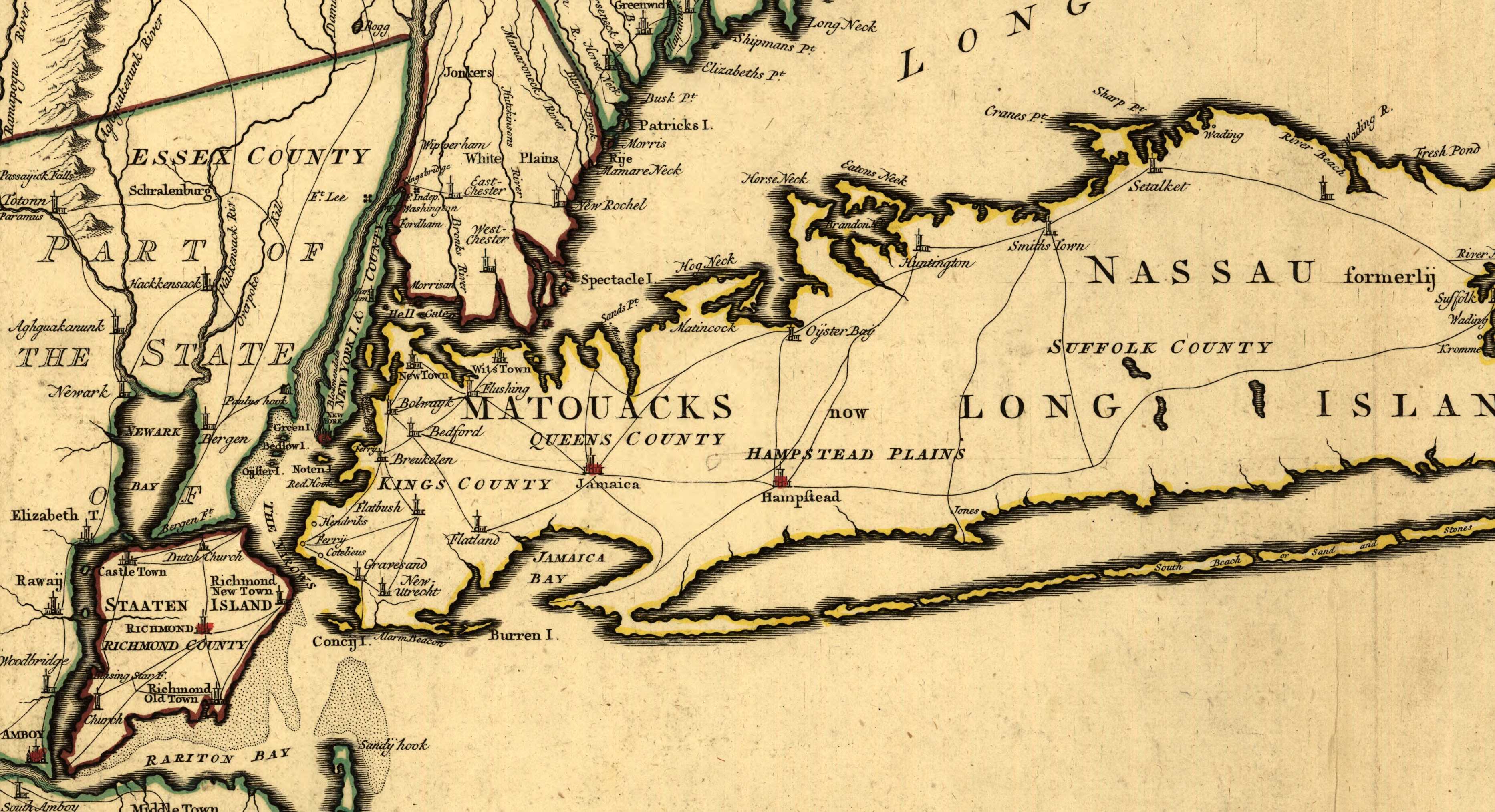 1656 Adriaen Van der Donck's book Beschryvinge van Nievv Nederlant was published in Holland. [8] A description of a modern translation of the book states, [9]

This edition of A Description of New Netherland provides the first complete and accurate English-language translation of an essential first-hand account of the lives and world of Dutch colonists and northeastern Native communities in the seventeenth century. Adriaen van der Donck, a graduate of Leiden University in the 1640s, became the law enforcement officer for the Dutch patroonship of Rensselaerswijck, located along the upper Hudson River. His position enabled him to interact extensively with Dutch colonists and the local Algonquians and Iroquoians. An astute observer, detailed recorder, and accessible writer, Van der Donck was ideally situated to write about his experiences and the natural and cultural worlds around him. Van der Donck s Beschryvinge van Nieuw-Nederlant was first published in 1655 and then expanded in 1656. An inaccurate and abbreviated English translation appeared in 1841 and was reprinted in 1968. This new volume features an accurate, polished translation by Diederik Willem Goedhuys and includes all the material from the original 1655 and 1656 editions. The result is an indispensable first-hand account with enduring value to historians, ethnohistorians, and anthropologists.

1656-1666 Widow Mary Doughty Van der Donck inherited Adrian's estate and married Hugh O'Neale of Maryland and they lived in Maryland. They returned to New Netherland [now New York] and received a patent for the inheritance in 1666. [12]:

... the whole great tract known variously as Nepperhaem, Colen Donck, and the Jonkheer's Land, or Yonkers Land, embraced between the Hudson and Bronx rivers, and extending to above the limits of the present City of Yonkers, granted by the Dutch West India Company as a patroonship to Adrian Yan der Donck, was inherited after his death, in 1665, by his wife, Mary, daughter of the Rev. Francis Doughty, of Maspeth, Long Island. She presently took another husband, Hugh O'Neale, and removed with him to his home in Patuxent, Md.

1662 "Charles County Court of 8 Jul 1662 ... Heugh ONeale, Plt.; William Heard, Def.; plaintiff admn. to Samuel Parker in action of case for 1000# tobacco; Daniell Johnson swore that in 1660 Samuel Parker said he had a heifer in the hills which he would willingly give Mrs. Vanderduncke now wife of ONeale for the care she gave him; Ann Ges swore that Joan Parker thought Mrs. ONeale poisoned her with a portion of something in a pot; Thomas Lomax, Enoch Doughtie, Mrs ONeale made sworn statements regarding the bill for treatment of Joane Parker; mentions Mr. Handley's 30 foot tobacco house; William Heard and John Waltom also made sworn statements; ONeale ordered to be non-suited and to pay court costs." [15]

On Sept. 21, 1666, Mary Doughty, widow of the late Adriaen Van der Donck, and wife of Hugh O'Neale, in right of her former husband, claimed "all that land upon the maine not far from Westchester, called the Younckers land, and brought forward several Indians to prove the purchase."

In 1699, [Jacobus (or James) Van Cortlandt] purchased from his father-in-law, Frederick Philipse, a tract in "Lower Yonkers," which became the nucleus of what was to be later the Van Cortlandt Park property. ... The land was originally secured in 1646 by the eminent Adriaen Van Der Donck, the first lawyer of the Colony of New Netherland, as a reward for successfully negotiating an Indian treaty of considerable importance. A purchase from the Indians, ratified by a grant from Director-General William Kieft, made it his. He built his bouwerie, or famhouse, at the side of the present lake, than a brook, and farmed at his pleasure that plain which lies between it and what is now Broadway, and which extends from the salt meadows of which he spoke to the southerly end of Vault Hill. When he died, in 1654, this tract passed into the possession of his widow, daughter of Rev. Francis Doughty, of Maspeth, Long Island. She afterwards married Hugh O'Neale, of Patuxet, Maryland, and by a new grant made to herself and her husband, in 1666, Van dee Donck's tract became "O'Neale's Patent." They in turn assigned the patent to Mrs. O'Neale's brother, Elias Doughty, considering themselves unable to manage its affairs properly on account of the distance of their home from it. Doughty disposed of the property in various parcels, 2,000 acres being purchased in 1668 by William Betts and his son-in-law, George Tippetts, whose name was given to the brook known to the Indians as Moshula, and a tract covering the site of the present Van Cortlandt House was conveyed by Doughty to Thomas Lewis, Frederick Philipse, and Thomas Lewis, Philipse afterward securing the whole from his co-purchasers." [18]

Ethan Alllen Doty states, "Mary Doughty (daughter of Rev. Francis Doughty and Bridget, his wife) married first at the Dutch Church in New York City, Oct. 22, 1645, Dr. Adrien Van Der Donck; he was known as the Younkers Van der Donck. They lived on the Hudson River, a few miles above New York City, at a place now known as Yonkers. and which took its name from him. After his death she married Hugh O'Neale of Maryland, and removed there. [19]

A description of the Mile Square reports the following [20]:

The old Colonial "Mile Square" had and still has a peculiar local significance, and its history is of interest. For more than a century before the Revolutionary War it had existed as a sort of oasis in the Manor of Philipsborough by which it was bounded on the north, west and south, and by the Bronx River on the east. It had been excepted from the "Manor" by the Royal Grant of 1693 to the first Frederick Philipse, and is there described as being "the land of Francis French & Co. in the Mile Square formerly sold out of the aforesaid patent." Forming as it did a part of the original "Colen- Donck" of the Patroon Adrian Van der Donck (from whose sobriquet "Jong-heer" Yonkers derives its name), it had passed on his death to his widow and was confirmed to her and her second husband Hugh O'Neale by patent from Governor Nichols in October 1666. Shortly thereafter the entire "Colen-Donck" was conveyed to Elias Doughty of Flushing, a brother of Mrs. O'Neale. In 1670 the "Mile Square" on the Bronx River was conveyed by Elias Doughty to French, Jones and Westcott, who having subdivided, sold or rented to farmers who owed no allegiance to the subsequently created Manor of Philipsborough by which they were surrounded.

A history of the Manor of Fordham gives the following account [21]:

The Manor of Fordham, which forms one of the three divisions of the town of WestFarms, was originally included within the parish limits of Westchester. The name is of Saxon origin, and compounded of two words, Ford (ford) and Ham, (a mansion.)

In 1656, we find the whole of Fordham, as well as Yonkers, in the possession of Adrian Yander Donck, Avhose widow, Mary, conveyed them to her brother, Elias Doughty. The latter, in 1666, sold them to Mr. John Archer, of Westchester, who, in 1669, obtained a confirmation thereof from the Indian Sachem Sachareth.

The first historical mention that we have of the Riverdale section of the city is by Henry Hudson, who speaks in his diary of the Indians from the heights of Nipinichsen coming out in their canoes to attack the "Half Moon." The title history begins with the purchase from the Indians by Dr. Adrian Van der Donck, of all that vast tract bounded approximately, by the Croton River, the Bronx River, the Harlem River and the Hudson River, and confirmed to him by a patent by Governor Kieft in 1645. After Van der Donck's death, his widow married Hugh O'Neale, and he and Alias [sic] Doughty her brother, divided the property by an east and west line and transferred the lower half to William Betts and George Tippett, and the northerly portion to Thomas Delaval, Frederick Philips and Thomas Lewis. This latter portion formed part of the Philipse Patent and Manor of Philipsburgh. This east and west line the southerly boundary of the manor, ran from a point on the Albany Post Road, opposite the parade grounds of Van Cortlandt Park to a point on the Hudson River some 300 feet south of the Dogwood brook. The line is even now, in many places well defined, as it was marked by a stone wall of immense boulders that must have required two yoke of oxen to move. The property on both sides of this line was again brought under one ownership by William Hadley by deed from James Van Cortlandt and by purchase from the Commissioners of Forfeiture of the Philipse Manor after the Revolution; the title to most of the property in the Riverdale section goes back to this William Hadley.

Mary had no children with Adrian Von Der Donck. Mary and Hugh O'Neal had Charles, born 1663 and Joy, born 1667.