1805 The will of John D King was dated September 13, 1805 and was proved in January 1807 in Montgomery County, Tennessee. It named children, including daughters Selah wife of Charles Pickett, Mary wife of William Pickett, and Rodah Pickett wife of Micajah Pickett, and 2 grandsons: John King Pickett and Thomas King Pickett. [2] [3] [4]

1805 A land survey was made for William Pickett for a 52 acre tract on the Wateree Creek branch of the Wateree River, Fairfield District, South Carolina. Survey dated and recorded May 21. Micajah Pickett, Robert Laffins, and William Pickett were adjacent landowners. [5] [6]

William and Mary (King) Pickett, were natives of South Carolina. The family is descended from English ancestors, who emigrated to America and settled in Virginia. The father [William] came with his family to Mississippi in 1807, making the journey by a flatboat down the Tennessee and Mississippi rivers to Franklin county; there he and his wife spent the remainder of their days with the exception of a few years passed in Sicily Island, La.

1823 William Pickett and Micajah Pickett Jr, of the state of Franklin County, Mississippi, appointed James Pickett of Greenfield District, South Carolina as their attorney to recover any assets due to them in the states of North and South Carolina. [11]

1828 Micajah Pickett Jr of Franklin County, Mississippi, residuary claimant on bond of Micajah Pickett to his wife Kissanah Pickett, wants to close the matter, so he agrees to payment of $1,500 to James Pickett for care of Kissanah. Rufus K Pickett and William Pickett, heirs to the estate of William Pickett Sr deceased, late of Franklin County, Mississippi agreed to the same. Dated September 8. [12]

1846 The will of Mary Pickett was presented to the probate court in Yazoo, Mississippi on January 26. [14]:

This day William Pickett and M Pickett Jr personally appeared before the Hon Probate Court of Yazoo County and on oath testified that during the last sickness of Mary Pickett deceased she did make known to them at her residence as witnesses her last will and testament as follows, viz To Cassandra Stevens, Martha, Ann Stevens, Micajah P Stevens, James M Stevens, Laura Stevens and Benjamin F Stevens and William Stevens, children of her daughter Celia Stevens, she gave to following negroes Hairah, Mussan Philip, Daphney and Winny as To Rufus R. Stevens and Levis Stevens children of her daughter, Mary Stevens an Negro boy Josha sworn to & subscribed in open court this 26th Jany 1846 Chas M Henderson. William Pickett, M Pickett Jr.

William Pickett further states that she bequeathed to Elizabeth Stevens, and Mary Ann Stevens her Baroncke? and Horse in his presence and the presence of his wife Elizas Pickett

1848 William Pickett and Micajah Pickett [sons?] put their plantations in Jackson County, Mississippi up for sale. 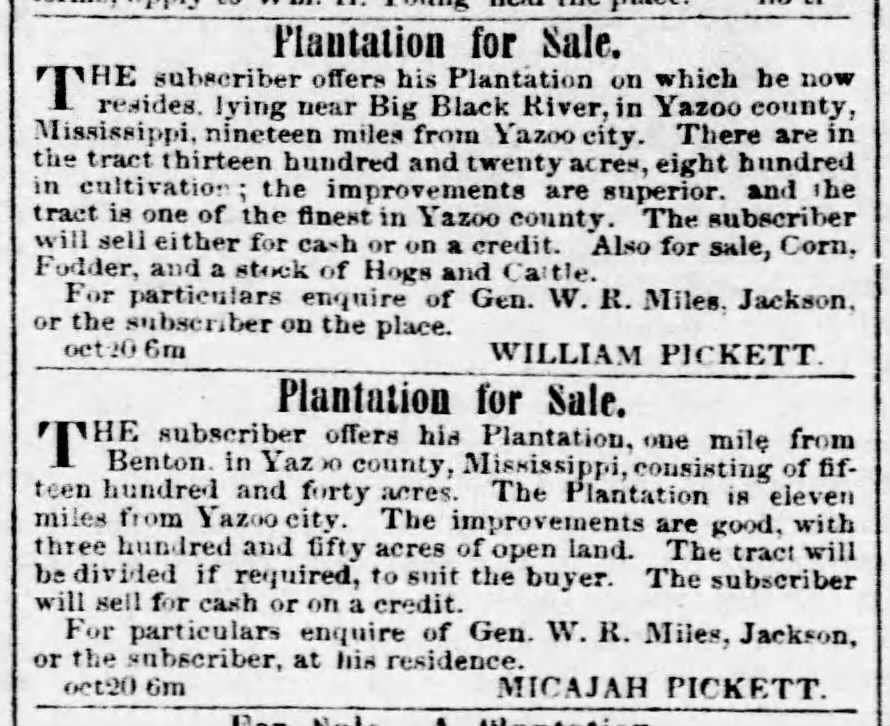 About 1807 William Pickett & Mary left Fairfield County, South Carolina. In 1809 they were in Catahoula Parish, Louisiana and in 1815 they moved to Franklin County. (Later Yazoo County was formed from Franklin). After William's death in 1827, Mary moved to Yazoo County with some of her children, where she lived for the rest of her life. [16]

There is a Picket Island in Catahoula Parish, Louisiana.

We list the names of several children based on the research of others. We seek further documentation about the children of this couple.

Seaborn Pickett [17] has also been named as a child by some researchers. However, Seaborn was listed in the 1850 census as born in North Carolina before the marriage of William Pickett and Mary King. Perhaps Seaborn was not a child of this couple.