1909 At age 13, Homer became deaf, perhaps from a fever. He was deaf in his right ear and almost deaf in his left ear, but could hear lower tones. [3] 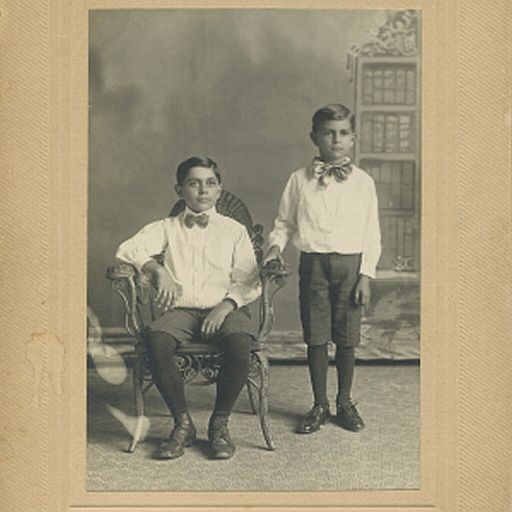 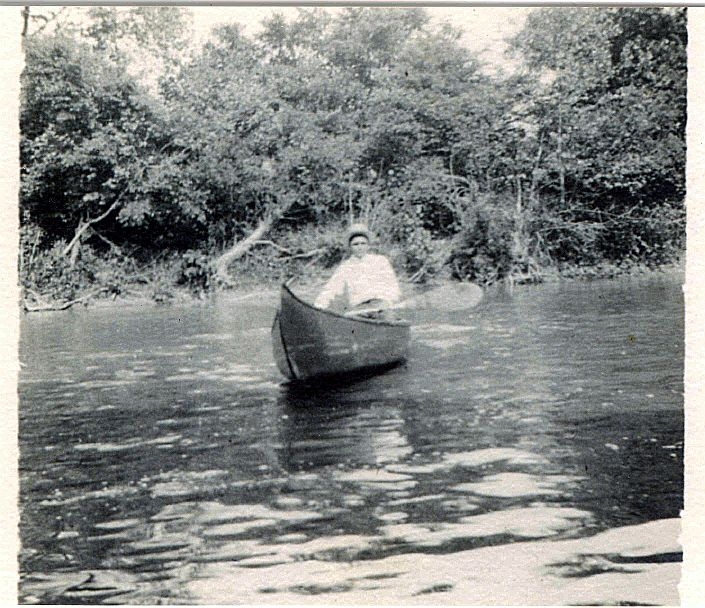 1917 Homer Nelson Wolfe registered for the WWI draft. His residence was 610 River Street, Dayton, Ohio. He was a carpenter in Dayton. He supported his mother and he was "not hearing good". He was of medium height and build and had dark eyes and hair. [8] 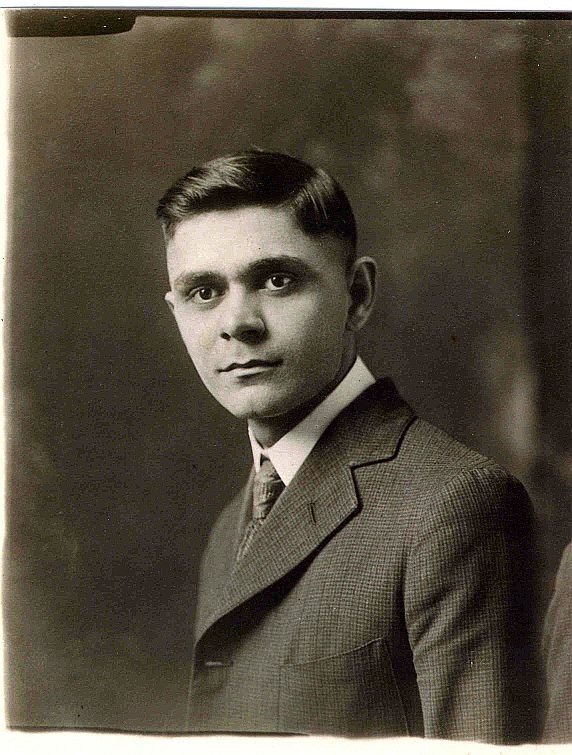 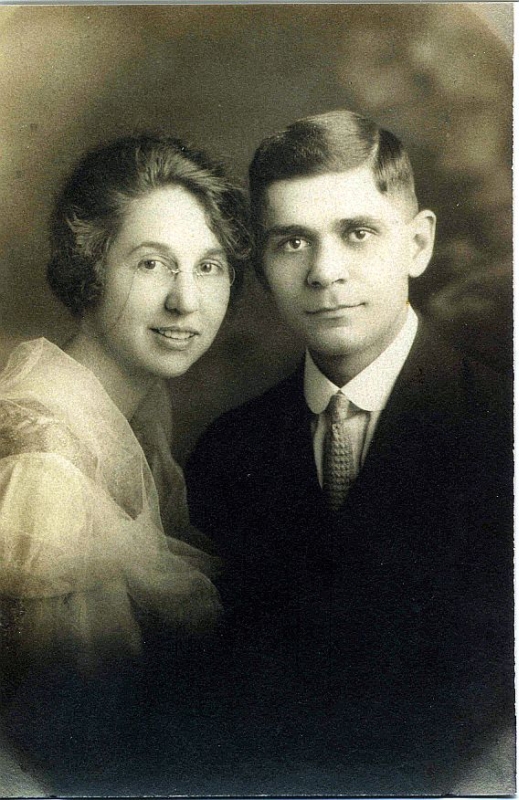 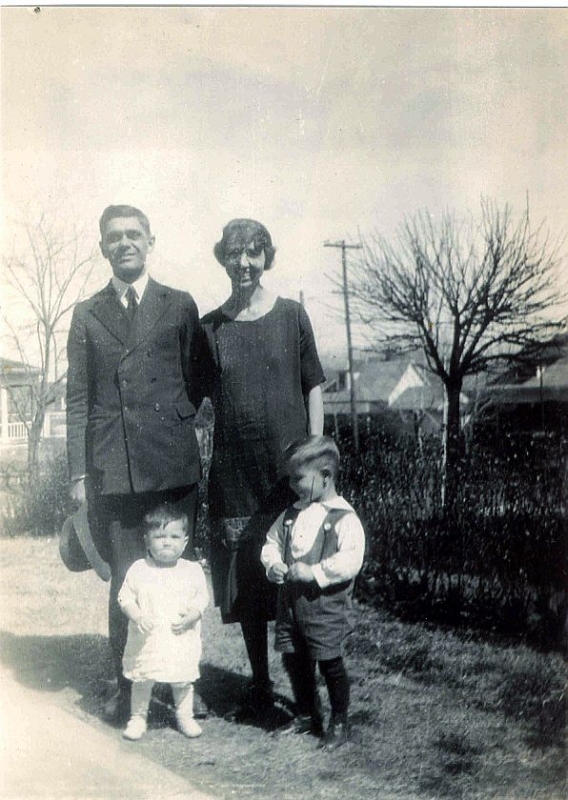 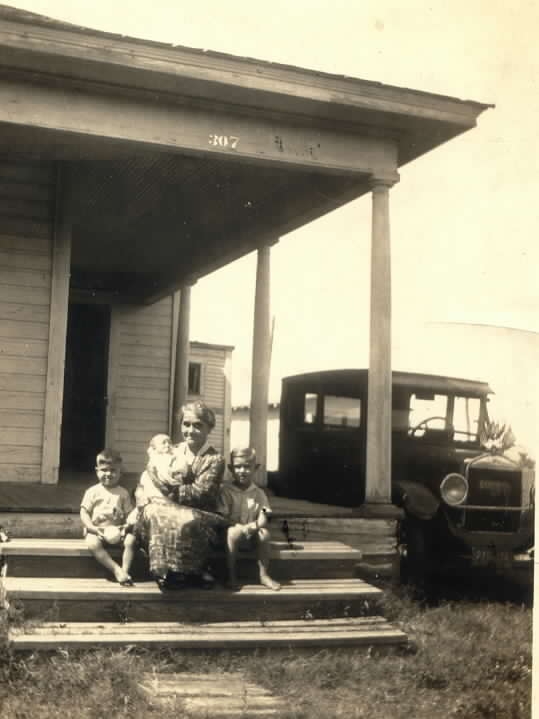 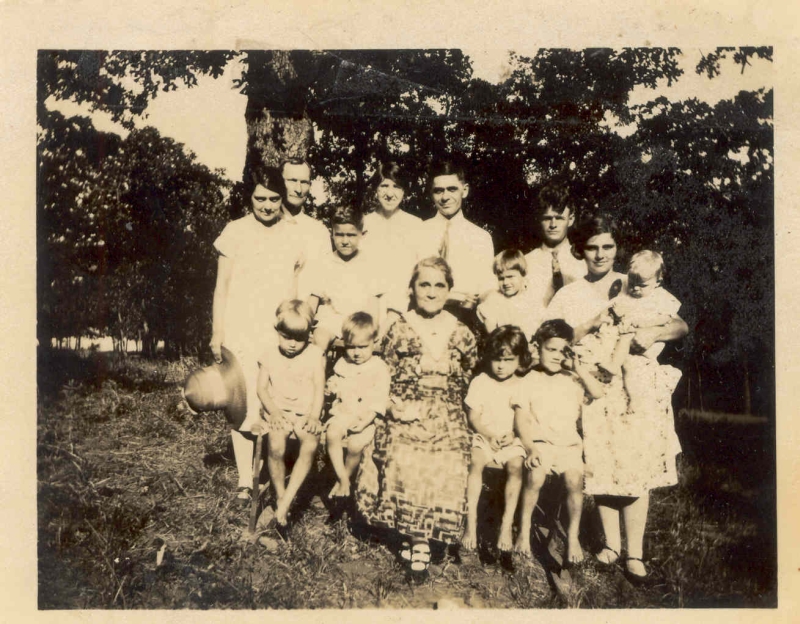 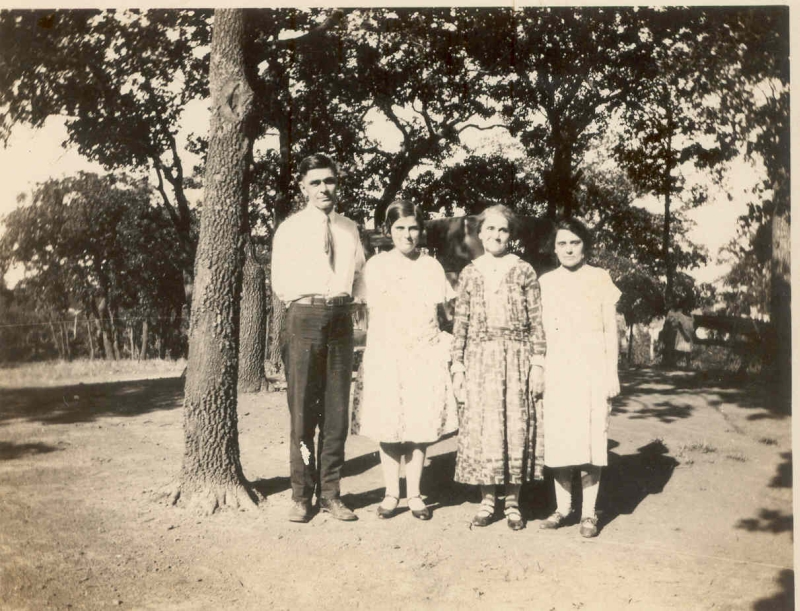 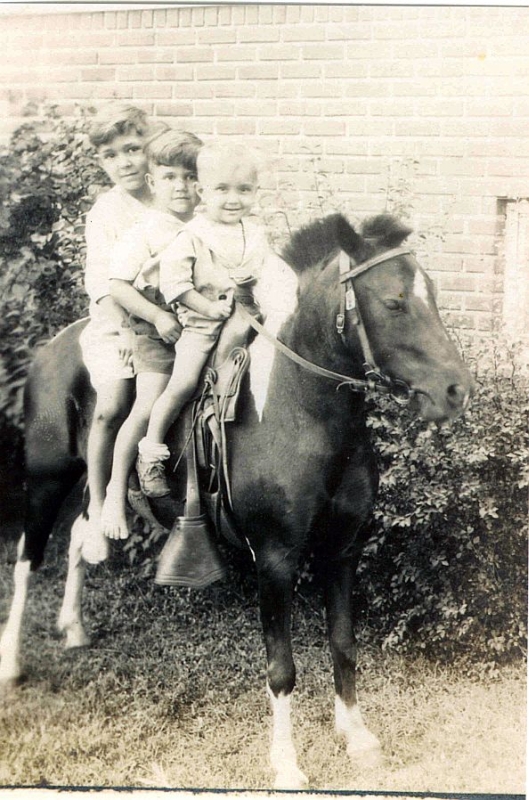 1936 Homer was working with the WPA in El Paso. His brother Charles lived in Dayton, Ohio and indicated that there was a job at GM in Dayton, so Homer moved there and lived with his brother Charles for a year. The job did not materialize and Homer returned to Dallas. [25] 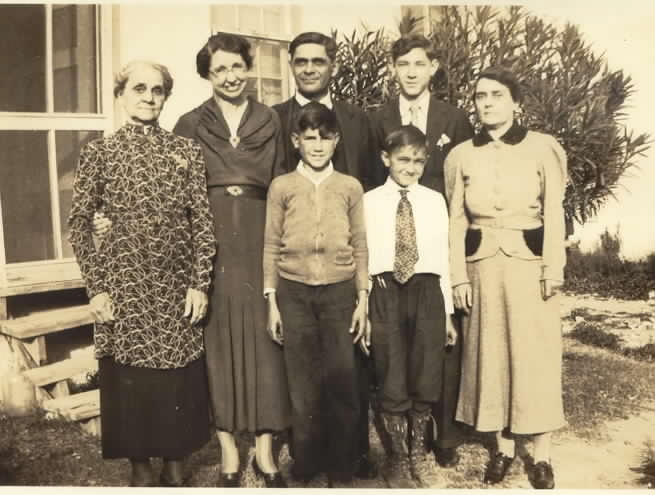 1937 July Charles, Petrovna, Gladys, Ranald and Julia drove to Texas in Ranald's new car to visit Clara, Homer and Eunice and their boys, and Grace and Charles. They visited the Centennial Exhibition. [26]. 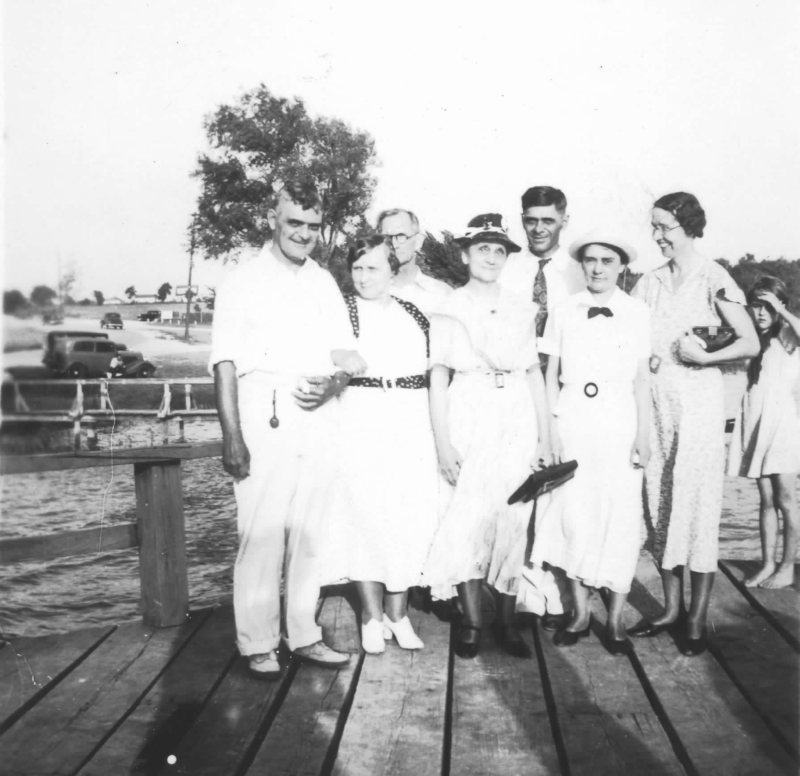 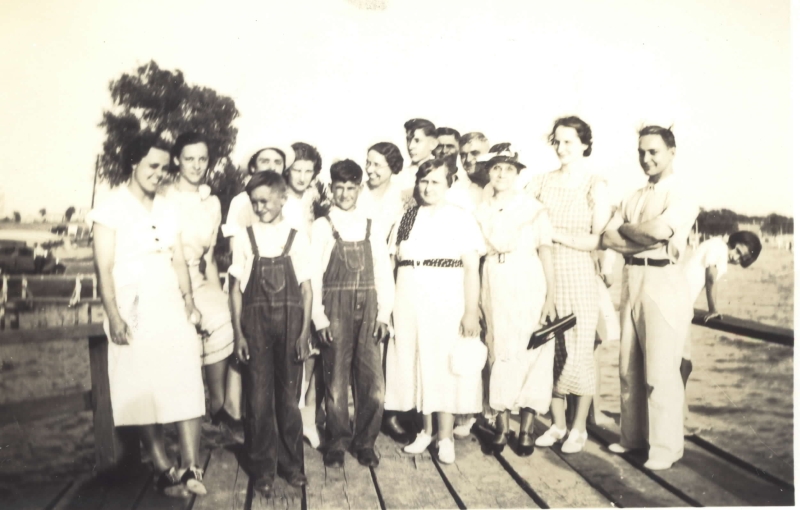 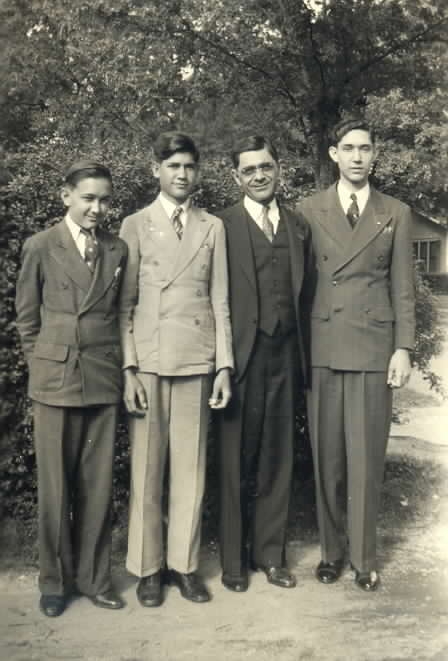 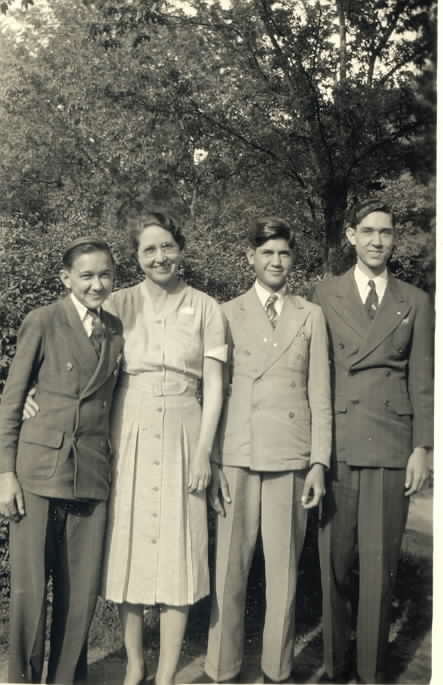 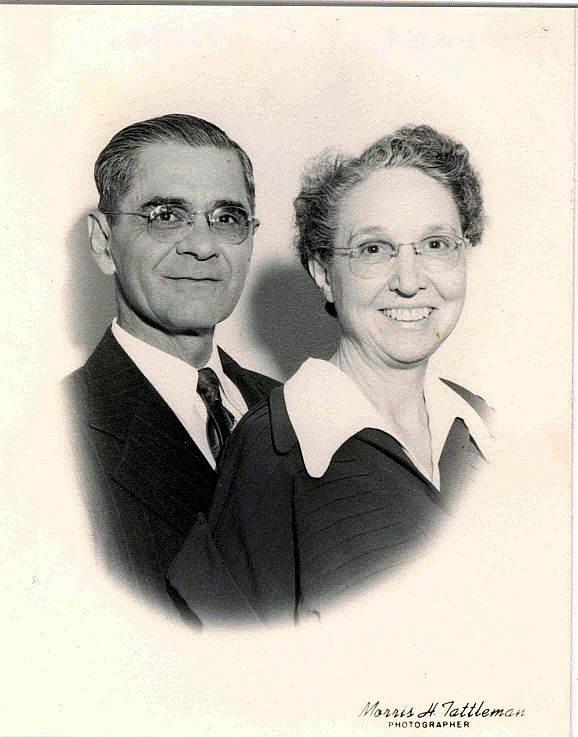 1958 Homer and siblings at Colorado Springs in the Rockies in Colorado. 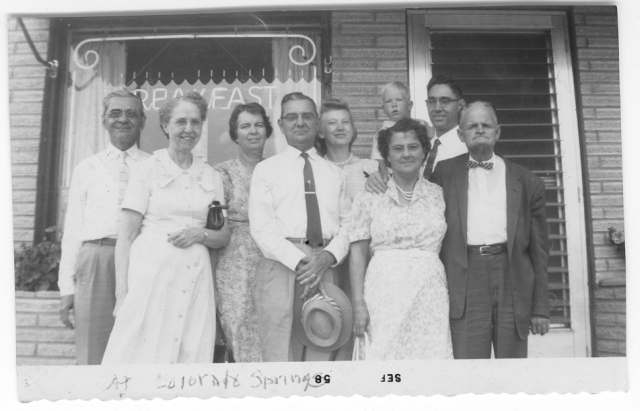 c 1980 Homer was a minister in Gunter, Texas. A newspaper clipping from his retirement home at Hilltop Haven reports

Homer N. Wolfe, a gospel preacher who served for many years with churches in Nebraska, Wyoming, and Colorado … Brother Wolfe has shared sorrows with many people and has helped others with overcoming problems … He has written a poem 'Grateful Acceptance' which appears in this issue. Homer Wolfe began preaching in Carrollton, Texas. He has three sons, Homer Jr., Phillip and Ira. His brother, John F. Wolfe, has spent most of his life working with Latin-Americans of Texas and Mexico.

Here is a story that Homer wrote about his parent's (Ira and Clara Wolfe) home in Paradise Florida. The events took place about 1906, judging by the ages reported in the story. He sent the story in a letter to his sister Faith, which is quoted here.

P.S. I am sending you a copy of a short story I am turning in on a contest that requires a true story out of your past life.
Hilltop Haven Apri1 1st, 1978

Everything is O.K. Sister. I do not have much to write about. The weather here is turning from winter into summer abruptly. I took some pictures yesterday, but it will be some time before I have the whole roll of films exposed and the pictures finished. We had a "Spanish Fiesta" here about two weeks ago. We all dressed as near Spanish style as we could. Had a Spanish "Mexican" Dinner. I may have a picture to send you some of these days. We also celebrated Easter with - well, we kept our hats on all day - even at meals - and pictures were taken on this occasion also. Two women are employed to invent "activities" for the group. They have to trump up something in order to earn their salary! I am feeling fine physically. I do not get lonesome because there are people around me all the time. If you wanted to you could find a room here and enjoy playing canasta or what have you and b1a,b1a, blaing through the day. However, one nice thing is that we each have a private room and can close our door and rest whenever we wish to. Do not know when I will see you again, but I love you.

PARADISE
Believe it or not, I once lived in Paradise. Paradise was a little place in Florida where the post-office, the grocery store, the hardware store, and every- thing else was under one roof, with only one entrance. We called it a commisary.

We lived on a ten-acre farm and our nearest neighbor was a mile up the road. It was a dirt road, and across the road from our house was a tract of pine trees fenced in with barb-wire fence. It was not our tract, nor our fence, but my dad built a style over the fence. lt was simply a stairway by which we could go up one side and down the other to get over the fence. That was in Paradise.

Why did we have that style Well, there was a spring of water on the other side of the fence. That was our water supply. It was sort of like Jacob's well: you had to have a bucket that you could let down with a rope and draw your water up. I was ten years old, and of course I was the waterboy. That was in Paradise.

I was in the fourth grade at school, and all the grades were in one room, and my sister was the school-teacher. That made it rough, but then, that was in Paradise.

Now the fellow who owned the pine tract put a big red bull in there along with the pine trees and the spring of water. We didn't know the bull had & bad temper, so we just went on our way as happy as could be. Everything was O.K. It was Paradise!

Well, one day my little five-year-old brother, John, and my littler three-year-old sister, Faith, went over the style with me to get a bucket of water. It was the first tirne the old red bull was anyhere near our part of the pine woods. But he was there allright.

We traversed the style without any trouble. I guess the bull was watching us out of one corner of his eye. However, we hadn't gone far when, well, I don't remember whether my sister had on a red dress or not, but that old bull was suddenly irritated. He put his head down and shook it a couple of times. Just shook his head you know, and pawed the dirt a little, and for some reason we were sort of scared. The bull wasn't far from us, and we would have had to cross in front of him to get to the fence, so we just stood still.

No, we didn't stand still long. My little brother made for the fence and managed to get under the lower barbed wire. He was frightened all right. believe me! Then that old bull, with his head down, was on his way right in my direction. I had my baby sister by one hand and was trying to pull her to one side, but the bull saw my manouver and came right after us. It was an aweful situation, for he was a big critter, and he was coming like a bolt out of the blue!

That bull had horns on his head at least eight inches long. They were slightly hooked, and he knew how to use them I am sure. I saw a man get hooked by a bull one time. He was simply picked up with a horn in his ribs and tossed to one side. It was at a rodeo in Cheyenne, Wyoming, and they had an ambulance there to take him to the hospital in short order.

There wasn't any hospital near us though, nor any ambulance either; just a big red bull with his head down and his sharp horns a rearin to pick us up and toss us over the fence! He was pounding the dirt and getting nearer to us every second. My little sister was in the greatest danger, for she was on the inside and I was trying to pull her out of the bull's range.

Here he came, snorting with rage and as mad as a bull! I was frantic with fear. I guess my adrenalin was doing a good job, for just as that bull came thundering up to us I gave Faith a final jerk. I guess the bull's horn missed her by about two inches. He tossed his head upward fully expecting to raise her weight with the muscles of his neck. He was going so fast that his momentum carried him past us a short distance, and I quickly crossed behind him almost dragging my little sister towards the fence.

The bull skidded to a stop and looked back bewildered. By the time he could turn himself and prepare for another oharge I had my sister safely on the other side of the fenee. Whether I went over the style or through the wire I probably didn't know at the time. Anyway, by the grace of God, we were safe and it wasn't long before we were across that dirt road and back home again.

Boy, THAT was PARADISE!

A True Story by Homer Wolfe
Written in a contest for a true life story.