Picture yourself hiking among glaciated spires in the Canadian Rockies or on an Alpine meadow in Switzerland. The strata forming the massive mountains around you were not deposited at their present location; in fact, many were deposited in a marine environment. In the Cenozoic, these rocks moved tens of kilometers horizontally and several kilometers vertically to arrive at their present position. This movement involved slip on a series of low-angle reverse or thrust faults, which in turn led to the development of spectacular panels of tilted rocks and complex folds. Geologic areas like the Canadian Rockies, in which regional upper-crustal shortening resulted in formation of a distinctive suite of thrust faults and folds, are called fold-thrust belts. Fold-thrust belts occur worldwide, including accretionary prisms, on the foreland side of collisional orogenic belts, at restraining bends of large strike-slip faults, and at the seaward toes of passive-margin sedimentary basins. Generations of geologists have struggled to decipher the character and origin of fold-thrust belts. Thrust faults were first recognized in 1826 near Dresden, Germany, where Precambrian granites overlie Cretaceous strata across a fault contact. Geologists in the 1840s mapped and described allochthonous strata in the Swiss Alps and proposed the then radical idea that sheets of rocks could travel long distances along subhorizontal faults that we now call detachments. This proposal was so radical, in fact, that it was not until careful mapping and documentation of the Moine thrust in northwestern Scotland forty years later, that geologists came to accept the concept of detachments and regional-scale thrust faults.

Documentation of thrust faults solved a number of previously intractable stratigraphic problems. Imagine how confused early geologists must have been when they climbed uphill, crossed a covered thrust, and abruptly entered a sequence of strata that was older than the sequence at the base of the mountain! In the 19th century, geologists also began to investigate the relationship of faults to nearby folds. The Rogers brothers first proposed such a relation in 1843 based on field work in the Appalachians. Subsequent authors followed up on these pioneering observations and recognized that fold formation may be an inherent consequence of faulting. It was proposed that in areas where regional-scale folds crop out on the surface, genetically related thrusts lie beneath them in the subsurface. Later, in the 20th century, geologists refined these fundamental observations and developed geometric and kinematic rules to help constrain the fold geometries portrayed in cross sections of fold-thrust belts, and grappled with the fundamental issue of how and why such belts develop. In this chapter, we first describe the geometry of thrust faults and thrust systems, and the relationship of faults to folds. We then outline the key ideas that have been proposed to explain the mechanics by which such fold-thrust belts develop. We conclude by discussing techniques that are used to construct geometrically valid cross sections. The tectonic setting of fold-thrust belts was discussed throughout Chapter 16. You'll notice that we present a large number of new terms in this chapter. Perhaps fold-thrust belt geologists are the most "jargonistic" people in the business, yet hopefully, you will find that the vocabulary ends up simplifying and clarifying the discussion. 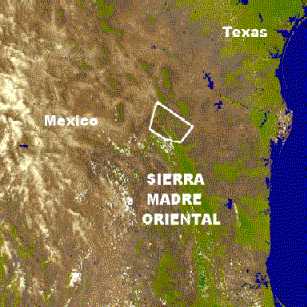 3-D satellite image of detachment folding in the Sierra Madre Oriental Mountains near Monterrey, Mexico (get your red-blue 3-D glasses)