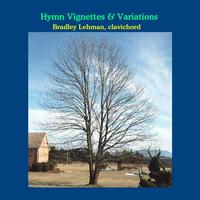 Listen to and purchase this disc at mp3.com!

The clavichord is the simplest keyboard instrument, dating from as early as the 14th Century. Its expression ranges from gentle delicacy to fiery abruptness. It is well suited to most of the keyboard literature without pedal, and (as demonstrated here) to music borrowed from other instruments. Its most popular use historically has been as a home instrument, especially for practice by organists and harpsichordists.

This album is a compilation of music from the standard classical keyboard repertoire, plus some new arrangements. The selections are all drawn from Hymnal: A Worship Book (1992), currently in use by the Mennonite and Brethren denominations, but most of these tunes can be found in many other hymnals as well.

- This short setting celebrates the bright joyousness of the text. The tune passes through ever-changing textures and colors.

2 We gather together/Holy God, we praise thy name

- I have brought these two dance-like tunes together as a Viennese minuet and trio in the style of Haydn or Mozart.

- This Japanese folk tune is usually found with a text about cherry blossoms. At first a single voice suggests the sound of a koto, while the hymn text celebrates God in nature. Then we find God in people: the tune as a round with two voices in the same key. In the third stanza, God with different faces as trinity, the second and third voices are in a different key or at a different speed from the first. This typically 15th-century compositional treatment brings exotic musical clashes while the tune and tempo unify the timeless purpose.

4 Let all creation bless the Lord

- Stately dance music by Melchior Vulpius in the style of a galliard.

5-6 Two settings by Johann Pachelbel (1653-1706), originally for organ: When in the hour of deepest need - The 16th century version as it appears in hymnals is presented first; then a sparkling three-part arrangement by Pachelbel, with the chorale tune played slowly in the top voice. Who now would follow Christ - This popular martyrs’ hymn of the 16th century became a staple German chorale for at least the next 200 years, with the tune rearranged in every generation. Pachelbel set it as a chromatic fugue.

7-8 Music by Bradley Lehman: By Peter's house - The text of this hymn celebrates stories about Jesus’ healing of those who asked for his attention. It also calls for help for ourselves, sometimes politely, sometimes more insistently. Holy Spirit, Storm of love - This stark piece from 1991 was an angry, frustrated reaction both to a winter storm and to a report of the U.S. bombing innocent civilians in "Operation Desert Storm." That morning I found Wren’s powerful text awaiting attention for the hymnal project, mixed it with my feelings about the day so far, and quickly worked out the musical setting at the clavichord: the gentlest of instruments shrieking at the violent music that was being played on it.

- A group of 17th-century French Jesuit missionaries went to the New World to evangelize the natives, in this case the Huron tribe. They brought not only their theology which they recast in local imagery, but also the popular tunes from home (also recast to sound local). From the 16th century onward there are over 200 surviving European versions of this particular song, "La Monica," most often about a young woman forced to become a nun against her will. The version played here is one of the most straightforward early settings, the "Almande de la nonette" from Susanne van Soldt’s virginal book.

- A theme from Edward Elgar’s cello concerto winds through this French carol in telling the story of the Annunciation. In this carol it is possible that there has been a copying error somewhere many years ago, especially with the old French style of notating repeats and alternate endings. By both the text progression and the music it seems that the "most highly favored lady" refrain should occur only when Gabriel is speaking, and "gloria!" only when Mary is responding at the end. Accordingly, I play it with those phantom repeat and second-ending marks restored. It works well sung that way, too.

11 Open are the gifts of God

- This gentle tune by Orlando Gibbons is #13 of sixteen Gibbons tunes in George Wither's collection "Hymnes and Songs of the Church," 1623. The text in Withers' book is from the Song of Solomon: "Oh, my love! how comely now, and how beautiful art thou!..." My arrangement is for an imaginary ensemble of viols, growing from Gibbons' original version which included soprano and bass only.

- The set of variations here is composite and moves backward in time: a four-part vocal version from J. S. Bach’s Christmas Oratorio, an organ prelude by Johann Pachelbel, and an organ harmonization from Samuel Scheidt’s Görlitzer Tabulaturbuch (1650).

- I play this 12th century plainchant tune first in parallel as organum, then a two-part setting in improvisatory 14th century keyboard style, followed by a triple-time version from the Buxheim organ book (c1470).

14 A mighty fortress is our God

- Martin Luther found this tune being sung lustily in a pub, and adapted it for his own use in church. The increasingly greasy arrangement heard here is an attempt to catch some of the original pub atmosphere and good fun in the rhythm. In any case, Luther’s text is a joyous celebration of good’s ultimate triumph over evil.

16-17 Settings by Johann Gottfried Walther (1684-1748), who was a cousin, colleague, and good friend of J. S. Bach: Jesus, priceless treasure - A selection of variations on this melancholy chorale: versions 1, 2, 6, and 7 from a set of ten. Lord Jesus Christ, be present now - This is Walther’s first variation from a set of 13, followed by the 1628 version as it appears in a modern hymnal.

- The dramatic set of seven variations by Georg Böhm (1661-1733) is typical of this passionate North German composer. His dynamic keyboard textures and techniques are particularly well suited to the clavichord, although his music is also effective on the harpsichord or organ.

- This traditional round is a plea for peace, mesmerizing in its repetitions. The arrangement is inspired partly by the ringing sound of hammered dulcimers. After all three voices have gone through the round, an upside-down version of the theme gradually replaces it. The original theme is present only in the imagination until it returns near the end.

All these pieces are available in complete form at mp3.com.

See also the related project "The Domesticated Clavichord" which shares some material with this one.

The clavichord used in this recording: 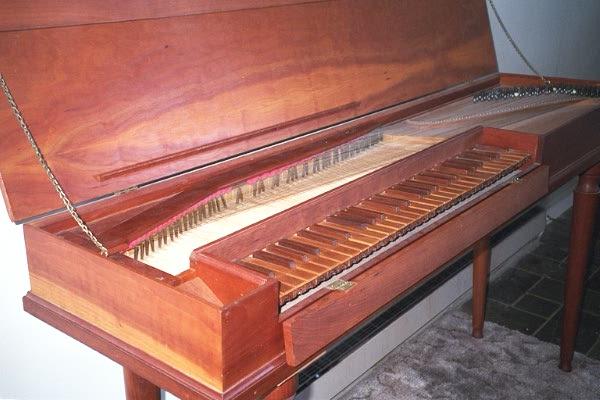