Yesterday, Rick, Lee and Zach stripped my old south-facing roof and replaced it with a new, solar-powered roof! While the weather forecast said there might be thunderstorms in the afternoon, the weather stayed dry and pleasantly cool throughout the day. While there's still some wiring to do and a few parts on order that haven't come in yet, the project now feels very close to completion! 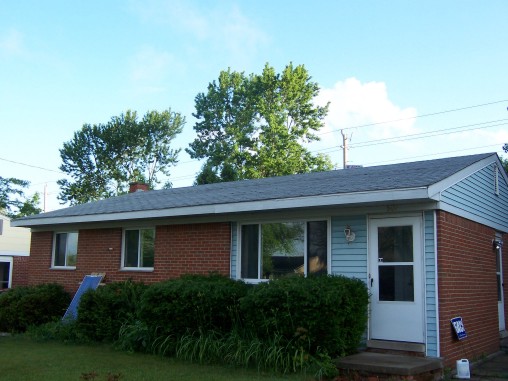 Although the stacks of roofing materials on the back side might have been a clue. 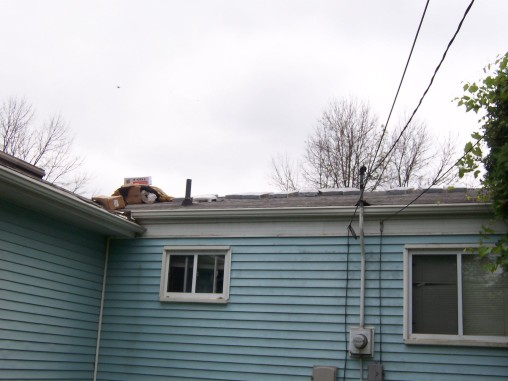 Once the team arrived--Rick, Lee and Zach--they went quickly to work stripping the old roof from the south side of the house. 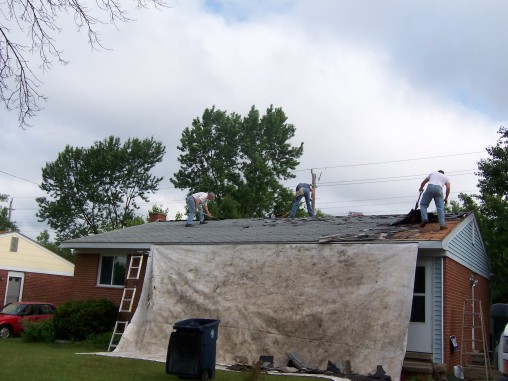 Soon, the roof was stripped bare. 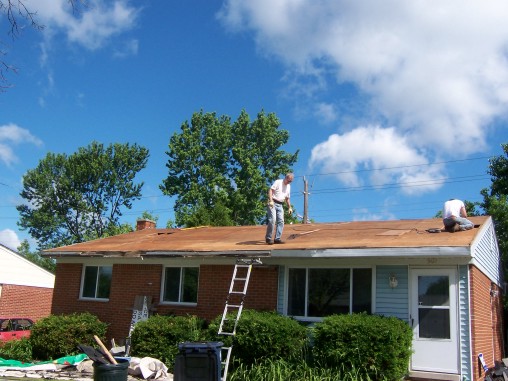 Hidden defects, including a rotten fascia board, had been exposed. 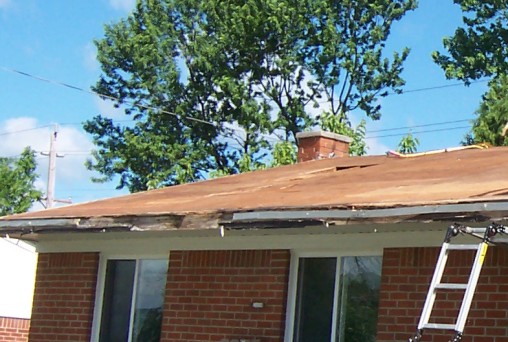 By the time the crew left for lunch, these had all been repaired. 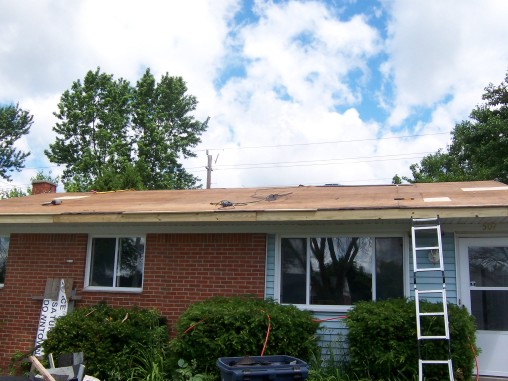 Putting down the ice-guard underlayment on the bottom part of the roof was next. 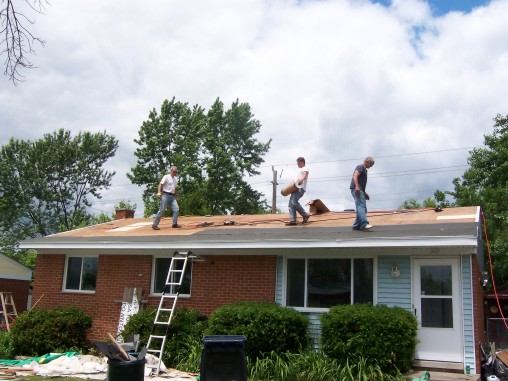 Followed by the Elk Versashield fire-resistant underlayment recommended by Uni-solar for use under the solar shingles. 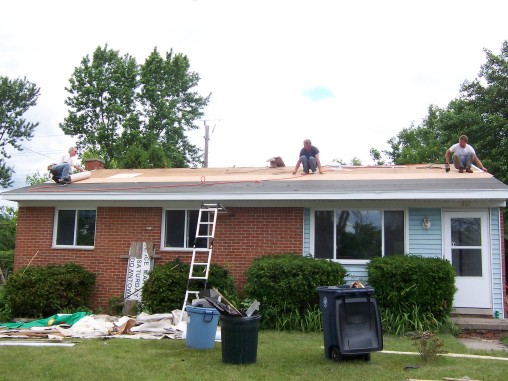 Ordinary asphalt shingles were installed starting at the bottom. 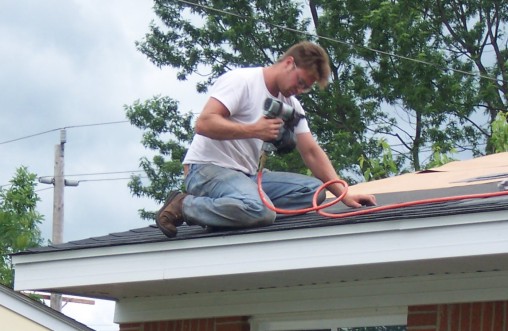 Holes were drilled in the top half, using a template. The holes were for the wires from the Uni-solar shingles to pass through into the attic. A 3/8-inch length of 1/2 inch PVC conduit lines each hole. 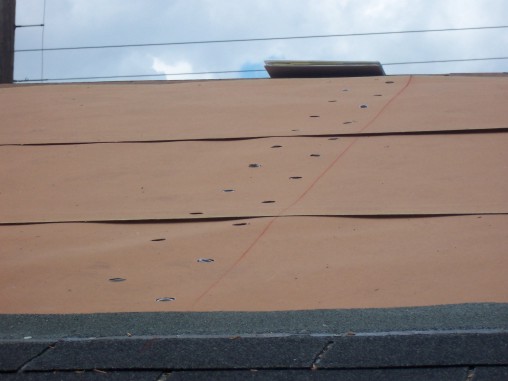 Inside the attic, the holes are temporarily covered by the channel portion of some electrical raceway. 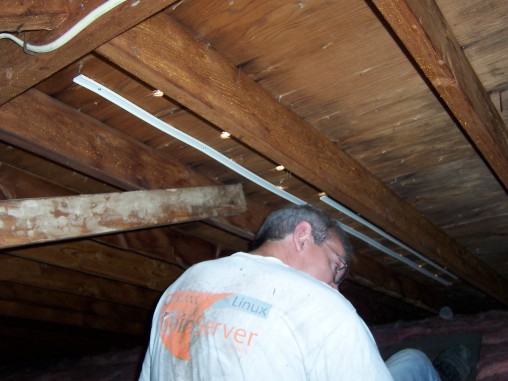 Rick had to work in some tight quarters to install the raceway. Fortunately, it was not hot in the attic. 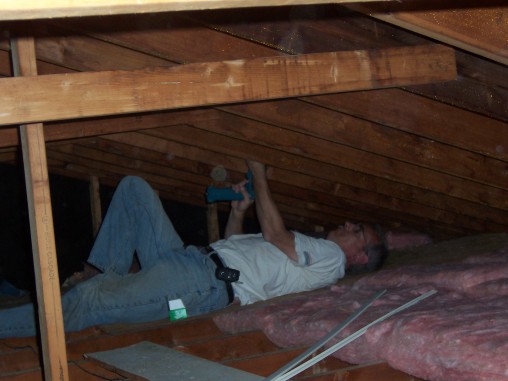 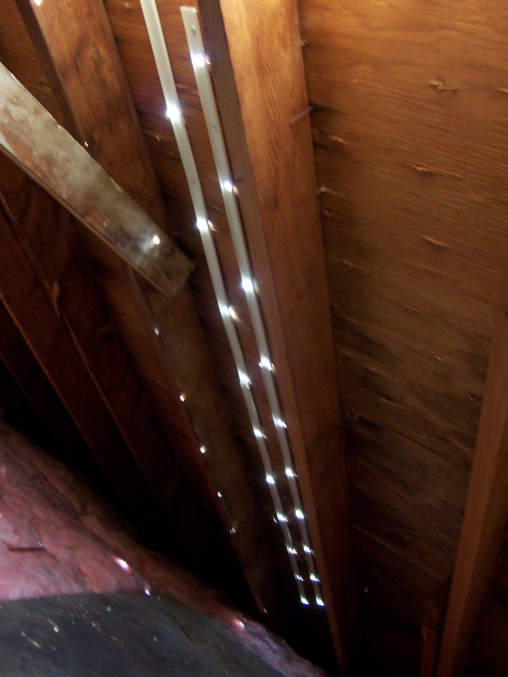 The spacing of the solar shingles was carefully determined (Uni-solar has fairly elaborate instructions for doing this). 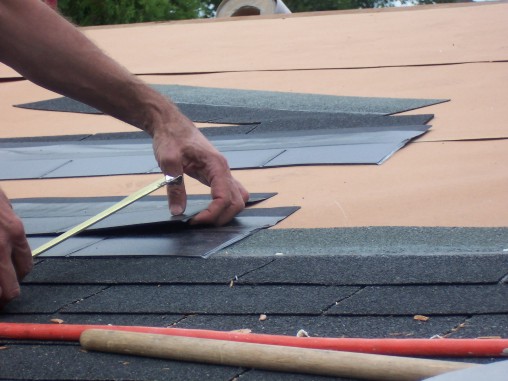 The solar shingles are nailed in place! 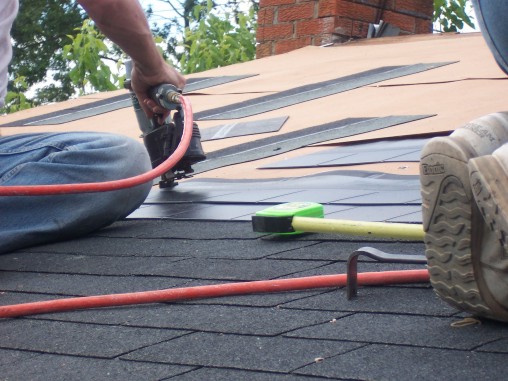 As the shingles are installed on top, wires begin to appear in the attic. 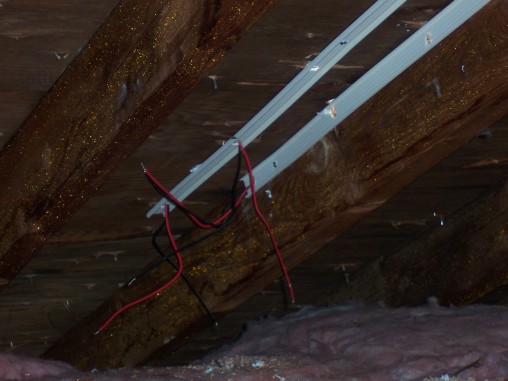 After the first couple of rows, installing the shingles went relatively quickly. 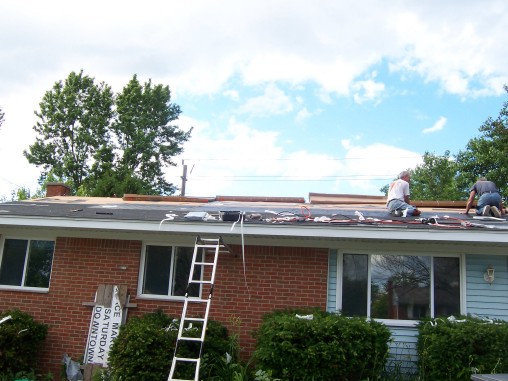 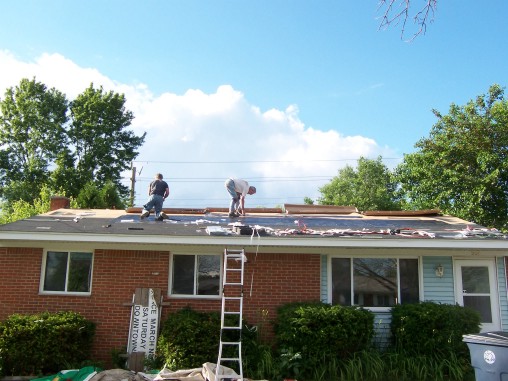 The details of laying a solar shingle: First, short the wire leads by twisting them together (the short-circuit current from each shingle is small enough that this isn't a problem). 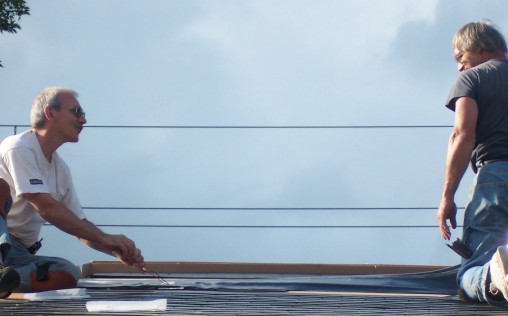 Next, feed the wires through the hole. 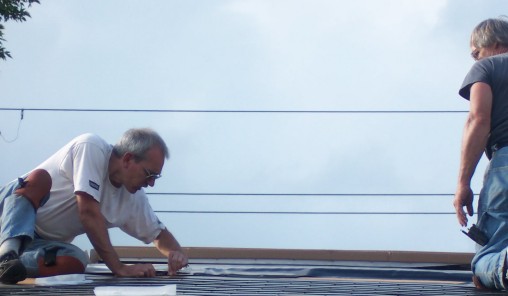 Line up the shingle. 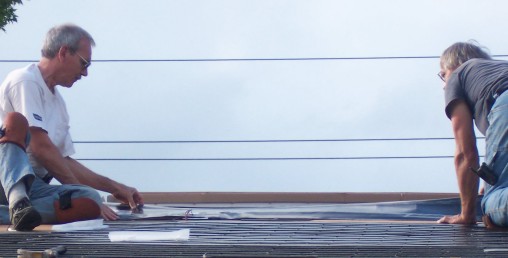 And lay it into place, making sure the wires go all the way through. 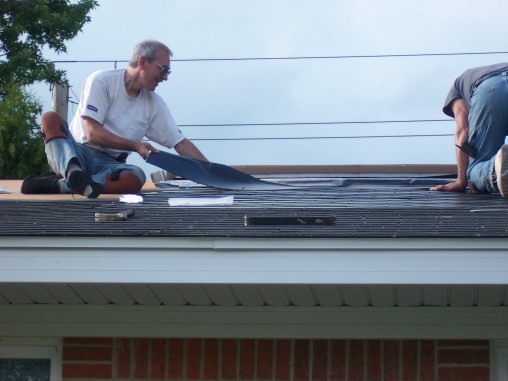 Fourteen of the 21 rows of solar shingles in place. 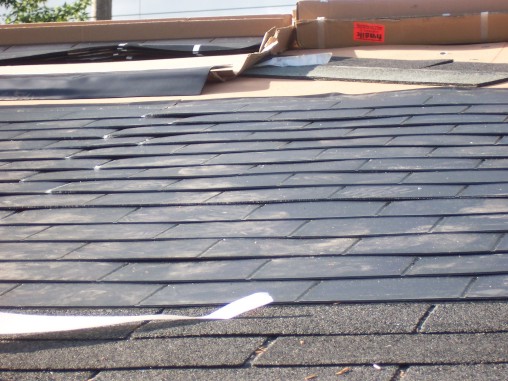 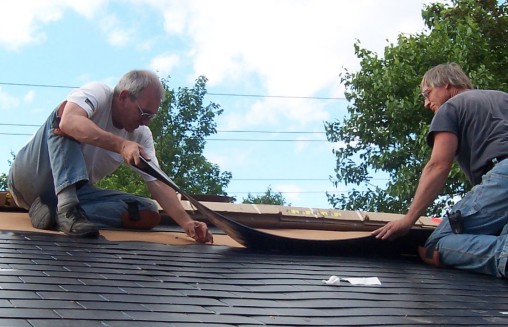 Most of the holes have wires coming through them now! 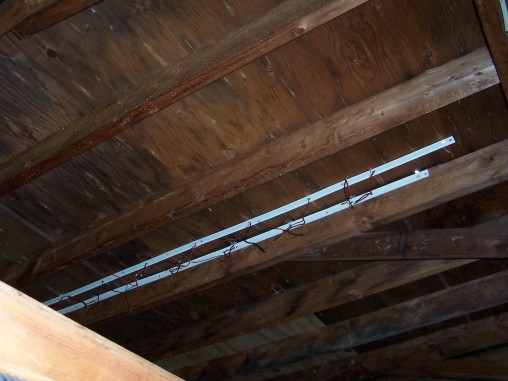 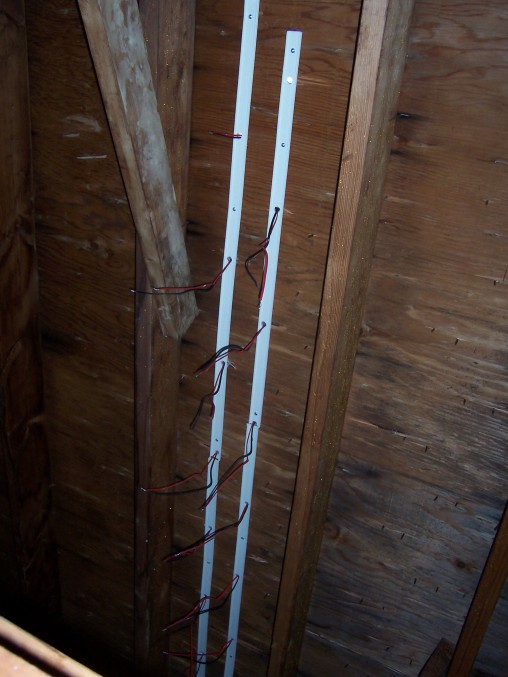 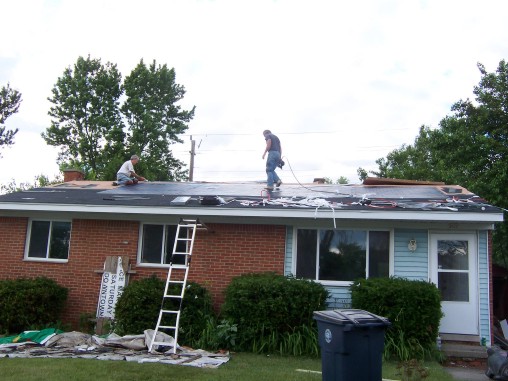 And the last shingle! 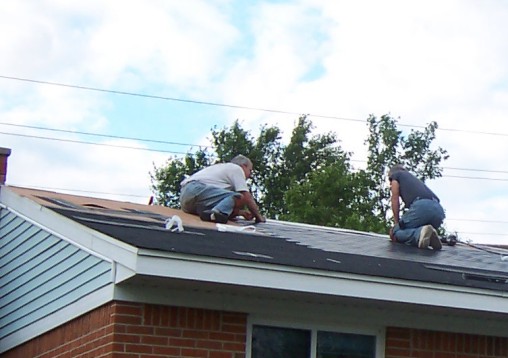 The remainder of the roof was covered with conventional shingles, the roof cap was installed, and Rick and Lee did a few additional repairs and finishing touches, finally finishing after 9 pm. The weather was nearly perfect throughout. 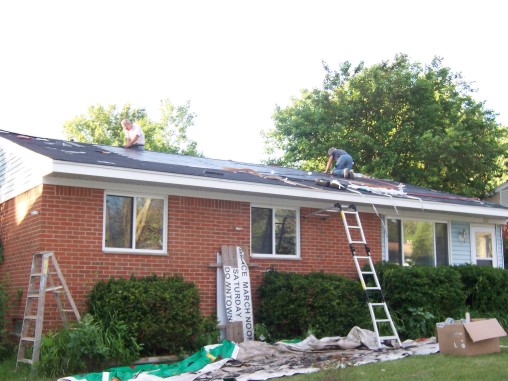 # posted by Bob @ 7:02 AM
Comments:
Great projcet! I might feature it on Treehugger.com soon.