Last night, Rick and I started working in the attic (yes, this time I did more than just take pictures) at about 9 pm and worked until about 6 am. We worked at night because it has been brutally hot here lately, with outside temperatures in the 90's and attic temperatures much higher than that. It also was safer since the shingles weren't producing any significant voltage or current. We worked ALL night because Rick heads off to vacation today, and we were trying to finish the project.

We got very close, but ran out of a few key supplies and time. We did get the system running in a reduced fashion, which was very rewarding in itself--we know the stuff works!

Rick spent most of the night working on the larger-scale wiring--the wires and conduit which tie the twelve series strings of shingles into the two big 4-gauge wires which take the power to the basement and ultimately the house. Here he is sorting out the wires for three of the strings: 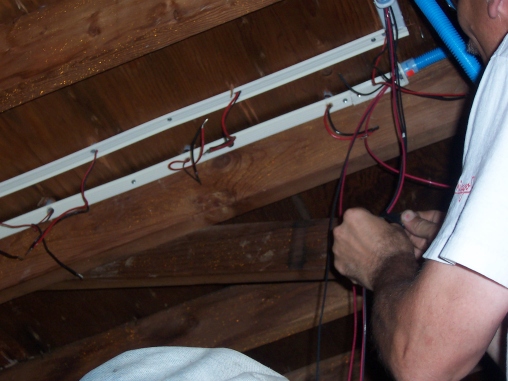 The 84 shingles were laid out in 21 rows, four across. Alternate rows were slightly offset, which meant that the wires in the attic were offset as well. The wires were arranged in 8 plastic "raceways," grouped in four pairs. Each raceway pair contains the wires for 21 shingles--11 in one raceway and 10 in the other. Electrically, however, the shingles are grouped in sevens. To make this work, we linked the bottom seven shingles in each raceway together, and then the top four in one raceway with the top three in its adjacent raceway, yielding three series strings from each pair of raceways. The wires from the three strings were combined into two lengths of flexible conduit: 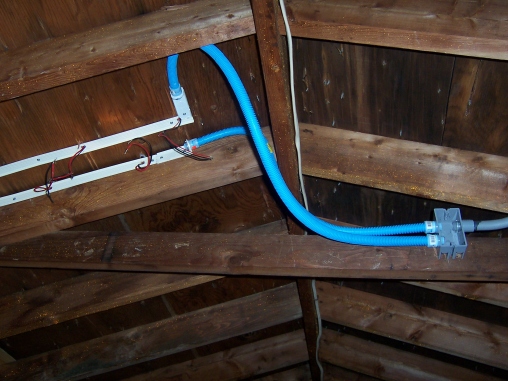 This conduit ties to a junction box, which serves to funnel the wire into rigid conduit which runs to the combiner box (above). The junction box also allows the series string formed by four shingles on one side and three on the other to be tied together--note the black wire which loops from one conduit run to the other. 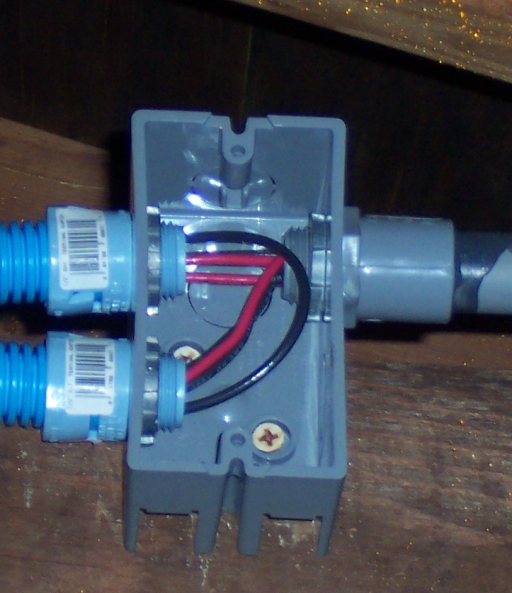 While Rick was doing this macro wiring, I spent much of the night doing the micro wiring--splicing the individual shingles together, and then splicing them into Rick's macro wiring. Unisolar's instructions call for using heat-shrink butt-end splices. This is an excellent way of joining two wires electrically, according to Rick, but it's also a pain in the butt (and the knees and the neck, etc.) to do in tight, poorly lit spaces. Here I am in one of my many stress positions: 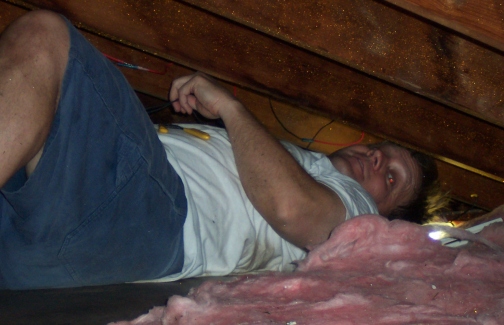 No, it's not as comfortable as it looks. Here's what I was doing with my face ten inches from the underside of the roof: First, I would find the two wires I needed to join, and make sure the ends were properly stripped (about 1/4 inch). I had a wirecutter/stripper tool resting on my belly which I used when the wires needed cutting or stripping. Next, I would grab one of the little butt splices and insert one of the wires into one end. I would then grab the crimping tool, also resting on my belly, and crimp the wire securely into the splice. I would then insert the other wire in the other end of the splice and crimp it. I got pretty good at this after a while, but then started to regress as it got to be 5 in the morning and I could no longer see or think straight. We had exactly enough splices IF I didn't screw any up. But I did, starting with the second one, and ended up maybe 15 splices short. I also managed at some point in the night to join two wires which shouldn't have been joined, which I'll need to fix later.

Here's a view of the Mate system controller's display at about 10:30 this morning, when the roof was getting pretty good sun:

67 volts in, 5.9 amps, for a total of 380 watts. This means we would have about 912 watts if all 12 series strings were online. The rated power for the array is 1428 watts (17 times 84), which would only happen when the sun's rays were directly perpendicular to the roof (which I'll get close to during the summer, but not at 10:30). So it appears that the shingles are performing pretty much as promised!

Unfortunately, about 11:30 this morning I started to hear gurgling noises from the batteries, meaning they were probably being overcharged (Rick and I must have entered the wrong settings on the charge controller, something we probably shouldn't have been doing at 7 in the morning with no sleep). I immediately flipped the switch connecting the solar array to the charge controller off. Hopefully the batteries haven't been damaged. Since they are used, the batteries are the weak link in the system--I was thinking I might need to upgrade them at some point. Hopefully that point isn't now!

I went out and bought the additional butt splices I need, and will head up to the attic and finish the micro wiring some evening in the near future (not tonight, though--I need some sleep!). I'll wait to hear from Rick (during or after his vacation) before I try to turn the system on again, so for now I've got an almost complete, almost working solar-power system, but I'm still running off the grid (and my two 12-V Evergreen solar panels I bought last year).