Rick, my handyman-helper, came over today and we got really started on the project. Rick surveyed the equipment and the furnace room in the basement and determined how much wire, conduit, and other hardware we'd need. We then went to Home Depot and bought the stuff--another $174.02. 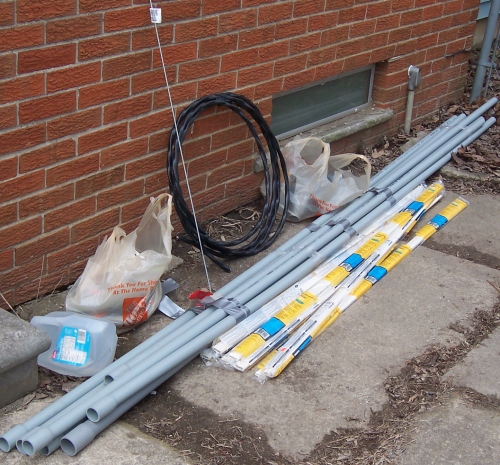 After we got back, Rick started drilling the holes for the mounting plate: 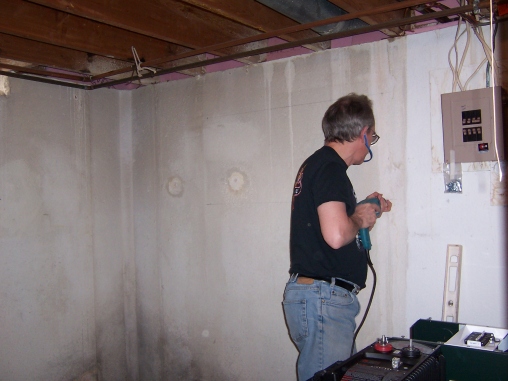 A short while later, the plate was in place: 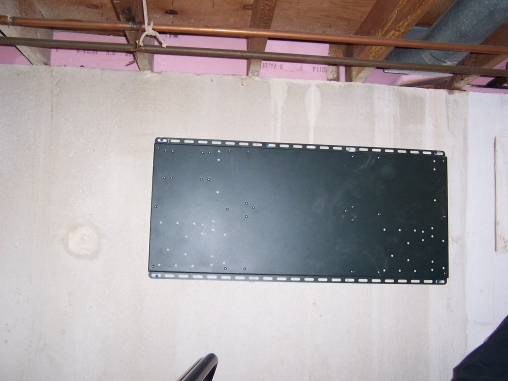 Next, we attached the inverter 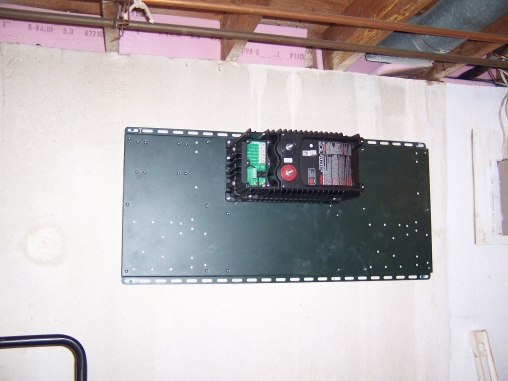 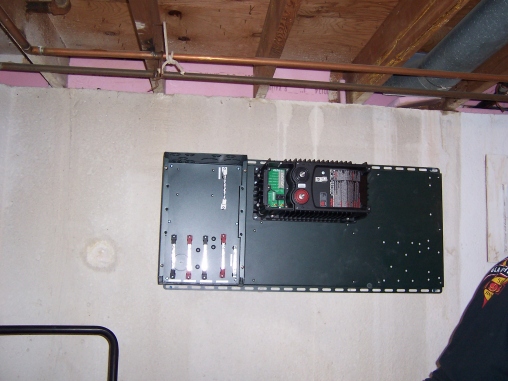 and the DC disconnect box. 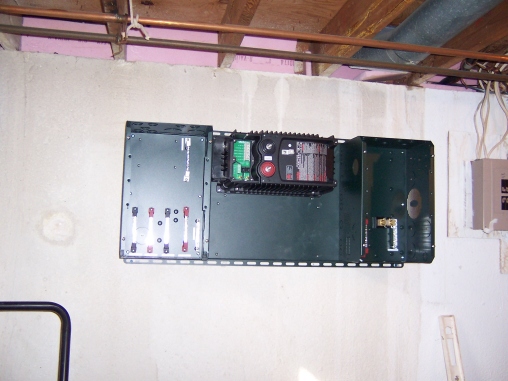 Unfortunately, the mounting plate is laid out so that the AC is on the left and the DC on the right, which is exactly opposite from what my basement layout calls for. The AC power center is at the right side of the wall, and the DC wires from the solar shingles will be coming from the left. All it really means is just a few extra feet of wire and conduit, and Rick has already figured out how he'll arrange it.

We were also able to run conduit from the basement to the attic inside an interior wall which separates two bedroom closets. Rick drilled holes in the first floor and the attic floor. I pushed the conduit up from the hole in the basement and Rick grabbed it in the attic and secured it. All of the shingle wiring in the attic will eventually lead to two wires carrying about 72 volts DC. These wires will feed through the conduit we ran today, and tie into the DC disconnect box on the panel, which will then link them through the charge controller to the batteries. The batteries will be connected back through the DC box to the inverter, which will be connected to the house wiring through the load center, and to the grid power as well.

The project is already showing that Kermit was right--it isn't easy being green! While going to solar power would seem pretty green, I've already had to bend a few of my principles. For starters, I normally prefer to avoid big-box stores like Home Depot in favor of local hardware stores, but it is unlikely that any local hardware store would have had all the stuff we needed, and it would have added on to this already very expensive project. Secondly, the conduit we bought is all PVC, which like pretty much every product made with chlorine is an environmental hazard both to make and to dispose of. Rick explained the trade-offs to me with PVC's competitor, metal conduit, which isn't perfect either, and is harder to work with. Rick's green credentials are excellent, so I went with his recommendation to use the PVC. Third, I am "financing" this project using 0% credit-card offers from Chase and Citi. I'd like to think that I'm sticking it to these evil corporations by borrowing their money interest-free, but in reality I'm probably sticking it to their less-fortunate customers who don't own houses or otherwise have my credit rating. The alternatives, however, were either waiting a while longer to do the solar project (continuing to pay DTE for coal- and nuclear-generated electricity), or cashing in several CD's at my credit union. Finally, I'd prefer to buy stuff that's made and sold locally, but I ended up buying all of the solar equipment from internet stores--in Massachusetts, New Mexico, and Arizona. My excuse there is pretty good--there's no store anywhere near here that sells any of this stuff. And both Outback and Uni-solar are American companies, and all of the Outback equipment is American made (the Uni-solar shingles are assembled in Mexico, even though the company's main factory is in Auburn Hills, Michigan, just 50 miles from here).

# posted by Bob @ 9:50 PM
Comments:
Bob,
Great project! I'll be watching your work with great interest. I live in SE Michigan and have been trying to get solar shingles installed for some time now. It's not something I will be doing as a project (rather pay someone to do it) but I'll be watching your project with interest.
Good luck.
Kevin

I just want to write to let you know that I think this is a great project and that it's great that you are letting the world know about your experience! Keep it up.

Yay. Go Bob! I'll have to come out there are check all this out!

I'm looking at the Sharp version of the roofing slates; the 60 Watt ND-60R01. They are twice as wide and twice as long as the traditional roofing tile. Anyone know about these and had any experience with them?

Does anyone know an installer in Southern California? We have been wanting solar power for sometime now and I am excited to see these shingles.
momincoto@cox.net

Does anyone know an installer in Southern California? We have been wanting solar power for sometime now and I am excited to see these shingles.
momincoto@cox.net